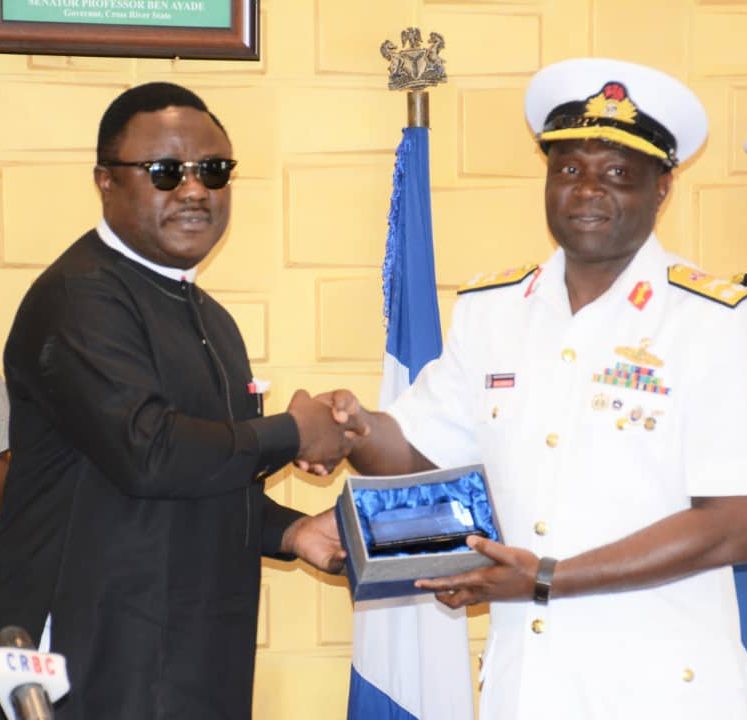 Greater collaboration and partnership with state governments with the Naval War College Nigeria (NWCN) will help to reduce the heightened state of insecurity in Nigeria.

The erstwhile Commandant of NWCN, Rear Admiral Adeseye Oke Ayobanjo said this when he and his delegation paid a courtesy call on Governor Ben Ayade of Cross River State to formally announce the relocation of the College from Rivers State to Cross River permanently.

The erstwhile commandant described the current security situation in Nigeria as asymmetric, complex and frightening, stressing that with the supports from the Cross River State government and others, the College can be able to help check it.

According to him, the security situation goes beyond the normal military solution of going to war but that it calls for harnessing the contributions of local authorities, state government, traditional and civil organisations.

He said the College, established in 2017 in Rivers State, trains senior level naval officers from Nigeria, and that many are now being admitted from other countries thereby making the state which hosts array of other military facilities a beehive of naval activities.

He said they have approved military courses, all aimed to enhance and better equip naval officers on warfare, adding that it is the highest naval training institution yet. The erstwhile commandant hoped that the relationship they have enjoyed in the state as host of many naval institutions, will only get better.

Responding, Governor Ayade called for practical presence of the College in the state, assuring them of the state government desired supports whenever such are called for.

He expressed happiness for the relocation of the College to its permanent site in the state which would allow the state and its people to benefit much from it.

He called for better equipping of Naval War College to be practical seen to be a War College.

He called on the College to use its presence in the state to help curb maritime crimes, kidnapping and piracy which had threatened maritime businesses in recent times.

He alerted that the state will soon seek contractual security for the expatriates that would soon flood the state to work on the signature projects, Bakassi deep seaport and the superhighway.