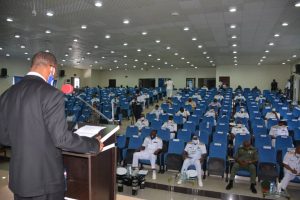 The Flag Officer Commanding Eastern Naval Command has called on participants of the Naval Warfare Course 4 (NWC) of Naval War College Nigeria (NWCN) not to allow their personal interests override national interests in the fight against maritime criminality. The appeal was made by  R Adm DA Adeniran(Rtd),  erstwhile Flag Officer Commanding (FOC) Eastern Naval Command of the Nigerian Navy, during the Inter-Agency Cooperation in Maritime Security Operation Seminar, 2020, held  by NWCN as part of the NWC 4  course package in Calabar. The Admiral said that in spite of all the technologies required and provided in the fight against criminality within the nation’s waterways, the human input was key.

He said when personal interest supersedes national interest, the operation will fail and the personal interest will invariably fail because it is always temporary. “When you get to your units after your training, look for other agencies and form a synergy as no one agency can ensure maritime security alone. If we have an improved Maritime Domain Awareness, there will be reduced maritime crimes,” the FOC said.

Similarly, in his address, R Adm AO Ayobanjo, the erstwhile Commandant NWCN, said the objective of the Seminar was to harness the expertise of respective maritime agencies through cooperation in combating maritime insecurity. According to the erstwhile Commandant, the maritime environment was the ‘life blood’ of Nigeria’s economy, conveying over 85 per cent of the total volume of the nation’s international trade as well as a store house of living and non-living resources harnessed by the nation. While the protection of the nation’s maritime environment has been provided by the Nigerian Navy in collaboration with other maritime agencies, some undesirable elements sometimes undermine this effort through crude oil theft, piracy, marine pollution and smuggling among others. Combating these attendant maritime security challenges in Nigeria’s maritime environment is a shared responsibility between the Nigerian Navy and other maritime agencies; it is in recognition of this that the Seminar was organised.

R Adm Stanford Enoch (Rtd), the Guest Speaker, opined that this Seminar would provide answers to address the collaboration deficits in the use of Maritime Domain Awareness systems to combat maritime security challenges in the nation’s maritime environment. The guest speaker who delivered a lecture titled “Maritime Domain Awareness: A Prerequisite for Curbing Smuggling Activities in Nigeria’s Maritime Environment”, said no nation would close its eyes and allow criminality thrive within its waterways. He also added that to check smuggling, there must be a centralized coordination and national policy on Maritime Domain Awareness that clearly defines concept of operations, command and control, information interchange as well as intercept capabilities. 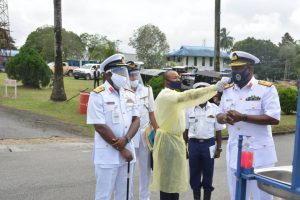 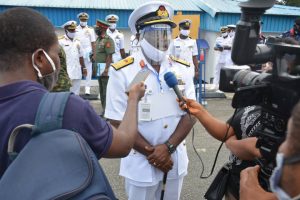 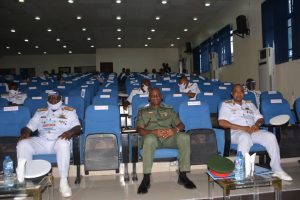