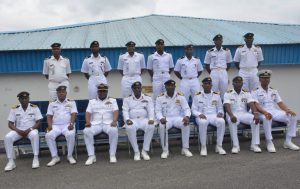 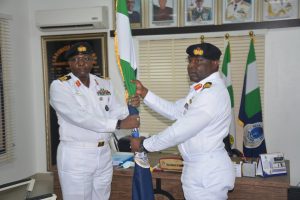 Rear Admiral Murtala Mormoni Bashir is the New Commandant Naval War College Nigeria (NWCN), sequel to the recent appointment of senior officers in the Nigerian Navy. He took over from Rear Admiral Adeseyi Oke Ayobanjo who has been appointed to Naval Headquarters Abuja. The Handing and Taking over Ceremony took place on 22 March 2021. In line with NWCN tradition, part of the activities for the handing and taking ceremony include valedictory address, formal signing of the handing and taking over notes between the outgoing and the incoming commandants and handing over of NWCN Insignia.

The outgoing Commandant Rear Admiral Adeseyi Oke Ayobanjo in his farewell address to the College narrated his ability to realise the institutional mandate of the college in the areas of conducting the Naval Warfare Course, Command Level Officers’ Courses, the sustainment of strategic training partnership with institutions such as NDC, British Military Advisory Training Team (BMATT) & selected university in Nigeria. Other areas were enabling access to the HQ NAVTRAC  e-Library to enrich the scope of participants research effort. He also seized the opportunity to appreciate Chief of the Naval Staff Vice Admiral Awwal Zubair Gambo for profound leadership. He also thanked the past and present members of faculty, officers, ratings and civilian staff of NWCN for their untiring efforts towards realising the College’s mandate during his tour of duty. He further implored the NWCN community to extend their commitment and support to the incoming Commandant.

Some pictures of the graduation ceremony are shown below.