Rear Admiral TC Udofia was born on 2 April 1963. He hails from Ikot Onwon Ediene in Ikono Local Government Area of Akwa Ibom State. He was enlisted into the Nigerian Navy on 24 June 1984 as an Officer cadet and commissioned Sub-Lieutenant on 18 January 1988. He was promoted Rear Admiral on 24 June 2015.

He has served in several capacities both within the Nigerian Navy and tri-service institutions in the Armed Forces of Nigeria each of which he exhibited commitment, drive, courage and consummate skill. He was Instructor Above Water Warfare School. He was also the Executive Officer and later appointed Commanding Officer Nigerian Navy Ship (NNS) KYANWA as well as the Commanding Officer of the Presidential Boat NNS AMARYA. The senior Officer was in Liberia for ECOMOG Peace Keeping Operations. He served as the Executive Officer NNS DELTA. He was Deputy Director Combat and Tactics at Naval Headquarters Abuja, Deputy Director Coordination and Curriculum Development at the Armed Forces Command and Staff College, Jaji Kaduna as well as Deputy Director Personnel Release Naval Headquarters Abuja. He was thereafter appointed Deputy Director Administration Defence Intelligence Agency. He was a Directing Staff at the National Defence College (NDC) Nigeria and later appointed Director of Academic Research and Analytical Suppoprt (DARAS) of the College. Rear Admiral Udofia also served as the Chief Staff Officer Western Naval Command. He is currently the Commandant Naval War College Nigeria. 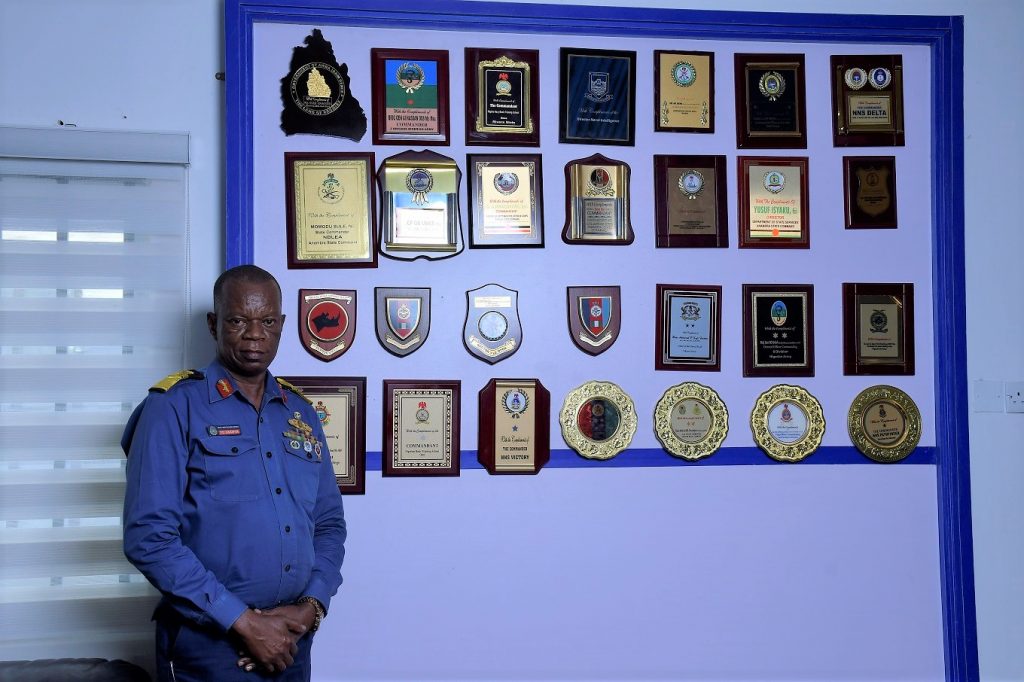 Rear Admiral Udofia is a thoroughbred military Officer who has attended several military and civil courses within and outside the country. He attended the Sub- Technical Course, Officers’ Long Course for Specialist Training in Above Water Warfare and Principal Warfare Officers’ Course. He did his Junior and Senior Staff courses at the Armed Forces Command and Staff College Jaji. He was in South Africa for Protection Force Course at South Africa Naval Ship SAS SIMONSBERG. He also attended Systems Approach to Training Managers Course by British Military Advisory and Training Team, Disaster Management Course by Bournemouth University United Kingdom and undertook the Establishment and Functions of Inspector General Course of Naval Post Graduate School Monterey California, United States of America. The Admiral also attended Higher Defence Orientation Course at Army War College, Mhow, India. He was a participant of National Defence College Nigeria. He is a highly cerebral person with a Bachelor of Science Degree in Criminology and Security Studies; and a Master of Science Degree in Peace Studies and Conflict Resolution from the National Open University of Nigeria as well as a Master of Science Degree in Strategic Studies from the University of Ibadan.